Washington, D.C. — Today, Navigator Research released new findings from focus groups with Independents and soft partisans in Nevada, North Carolina, and Wisconsin. During the groups, fears of inflation permeated conversations about jobs and the economy, even when participants were shown positive economic indicators.

New Navigator data supports these qualitative findings, with 92 percent of Americans reporting concerns about the rate of inflation, and more than nine in ten Americans (91 percent) believing the costs of everyday goods like groceries and gas are going up. As one Wisconsin woman put it during the focus groups, “The food prices have gone up…  and they’ve given you less. It used to be 16 ounces. Now it’s 13 and they hope you don’t notice. And sometimes you can go in the store the next day, a price will be 20 cents higher.”

Across partisanship, some participants blamed corporate greed for rising costs. When asked who the economy is working for right now, a Wisconsin woman said “Businesses, corporations. Yes. They’re making record profits. For us, the people, the consumer, there are few people that are making money. But the corporations are making profit. Paying zero taxes.” Navigator’s recent polling also shows this connection — seven in ten Americans believe corporate greed is a reason for rising costs, including two in three Independents.

Oil companies specifically are blamed for inflation, with one Nevada man saying, “The oil companies ha[ve] been able to get away with it because, as everybody knows, they support political campaigns.” In a forced choice question in a Navigator survey from March, Americans blame gas companies more for rising costs than President Biden and Democrats.

“In our focus groups, respondents organically cited and trusted an inflation rate of 8.5 percent, but were surprised or distrusting to hear about the millions of new jobs created in the last year — that’s a major messaging problem that progressives have six months to fix,” said Bryan Bennett, Senior Director of Polling and Analytics at The Hub Project and Advisor to Navigator Research. “But the pain of inflation can’t simply be solved by pointing to jobs numbers, despite how historic they are — progressives must show they have a clear road to recovery. Biden’s economic agenda, student loan debt cancellation, and lower drug prices all earn high, bipartisan approval in our polling and could make a real difference in people’s everyday life.” 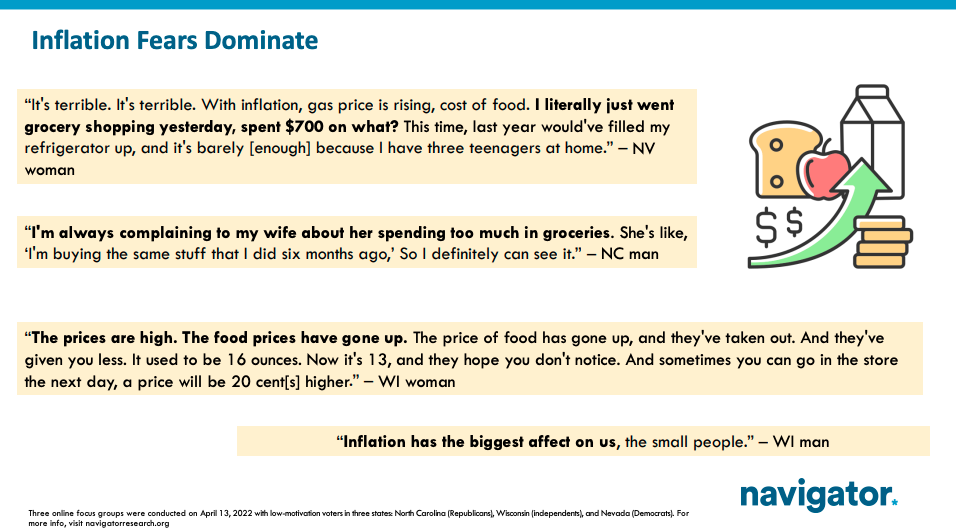 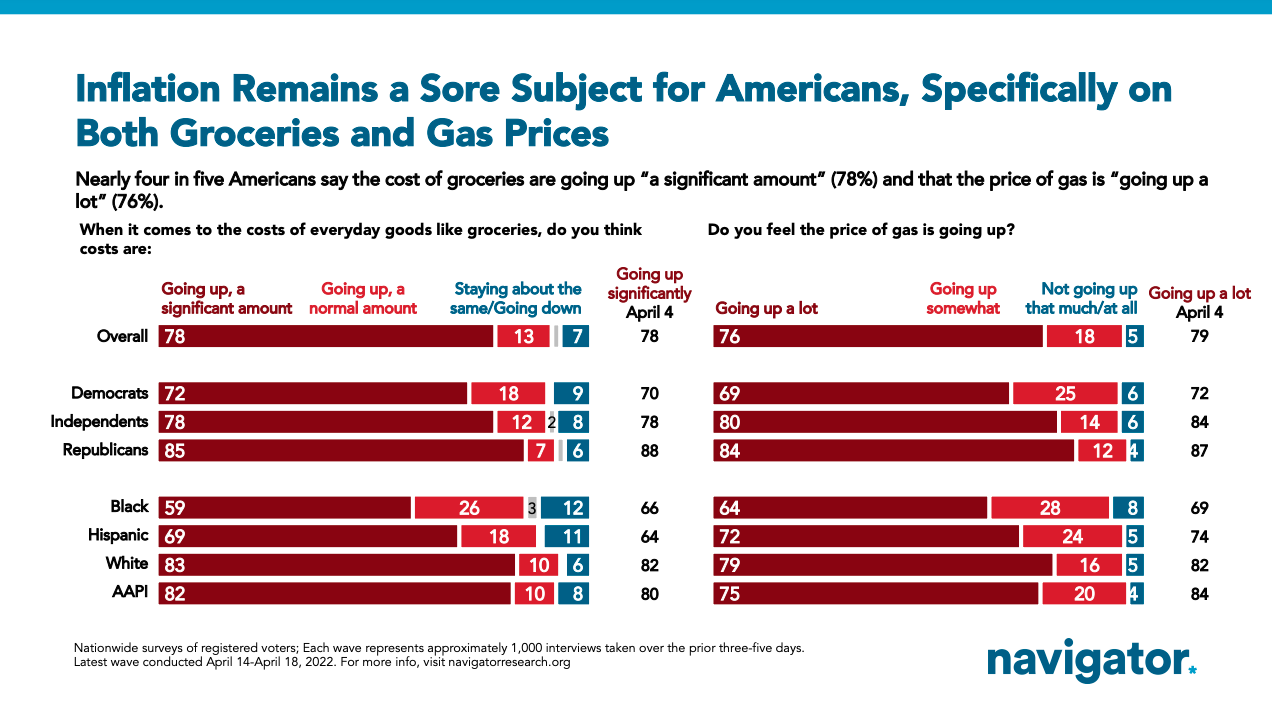 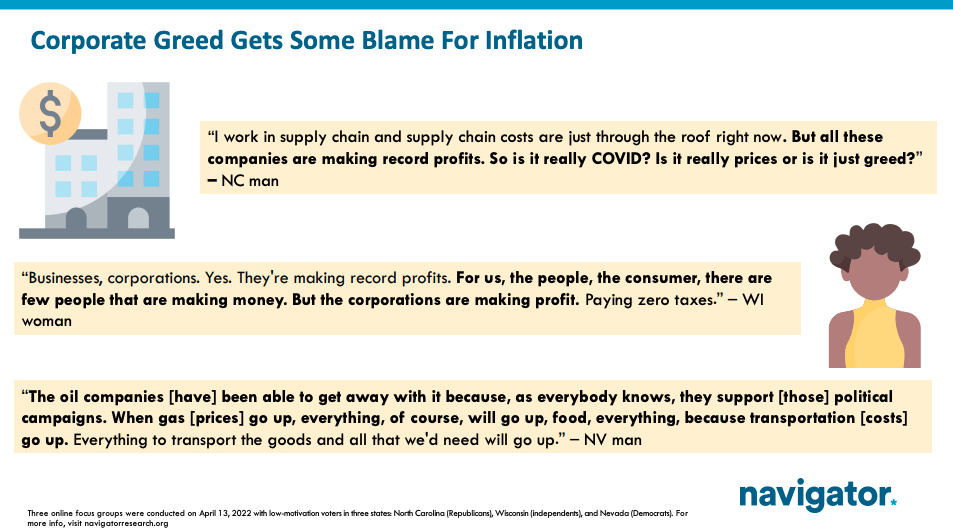 Even when shown positive economic indicators, pervasive inflation concerns cloud Americans’ assessments of the economy. During the focus groups, participants were shown several metrics about the current state of the economy from government sources, including:

Participants across groups largely believed these facts, calling the low jobless claims and unemployment rate especially impressive. But some saw them as at odds with their own experiences. One North Carolina woman said, “So you can tell me it’s doing great, but if I’m struggling to buy groceries and gas and will be out of a job for real in two months, that to me is saying, no, it’s not really doing that great.”

In response to the job creation numbers, some voters weren’t sure where the jobs were going; one North Carolina man said, “… As far as going to restaurants… I can’t be seated because there’s not enough people working. I mean, I’ve never experienced that…. I don’t understand it, I guess.”

When asked what economic indicators participants would need to see to feel like the economy is rebounding, one Wisconsin woman said: “Oh, prices going down. Gas prices down.”

Navigator will release more findings from these focus groups, more quantitative tracking on inflation, and more topics throughout the next few days in our bi-weekly newsletter — sign up here. 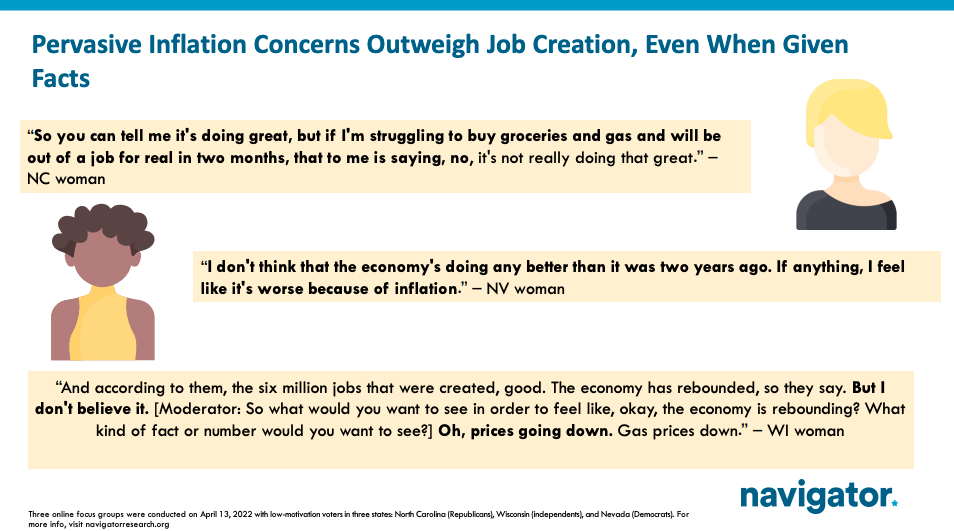 About The Focus Groups